Start to learn tennis in Singapore, a sports a class of its own. In Pertama Tennis, we will ensure you get the bestand experienced coach to help you master the skills in tennis

Lessons for All Levels

Pertama Tennis provide tennis coaching services across the island to students of all age groups (children and adults) as well as students of all skills level (beginner, intermediate & advance). These lessons can be conducted in individual or group lessons, depending on the students’ interest.

We strongly believe that technology has its role to play in improving a player or student. Lessons are video recorded and analyzed by the coaches. This also provides a “third person” point of view for the players to view and understand more in depth of their performance. …

Tennis lessons provided by us are well planned and strategised. With the help of our team of coaches, consisting of experienced coaches, former players and former national players, we are able to provide tennis coaches in tandem to the students’ different skills level.

Most importantly, at Pertama Tennis, we ensure lessons are conducted safely and the students enjoy their journey with Pertama Tennis. 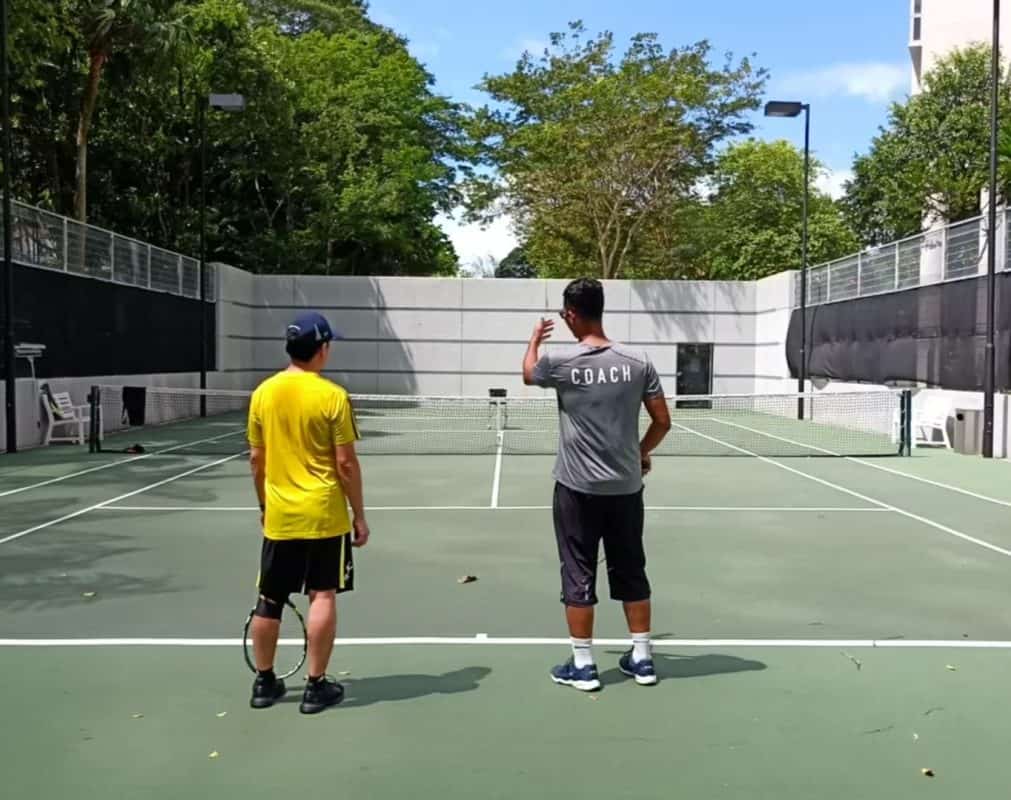 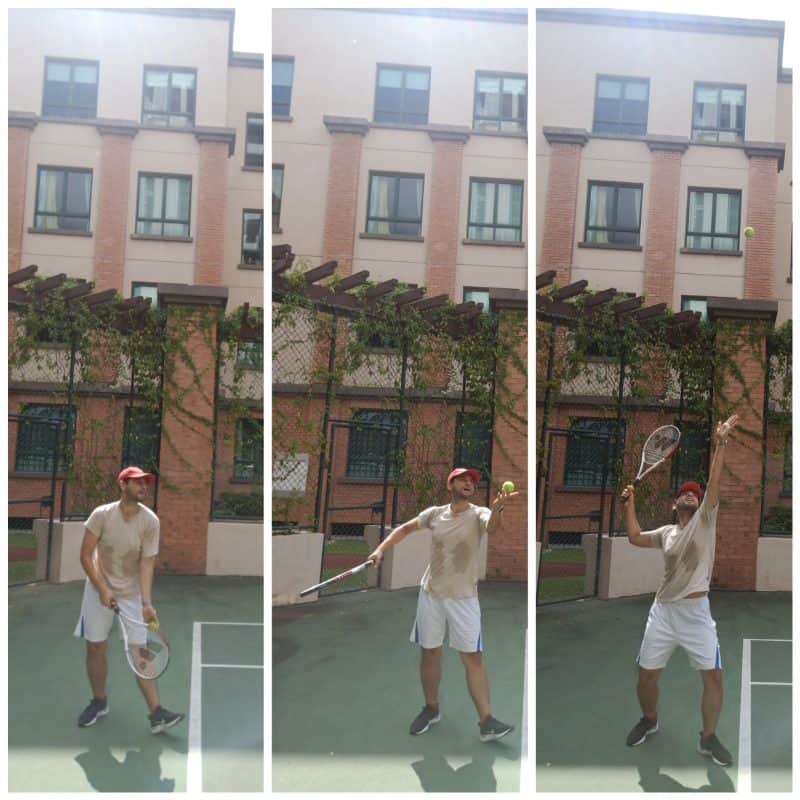 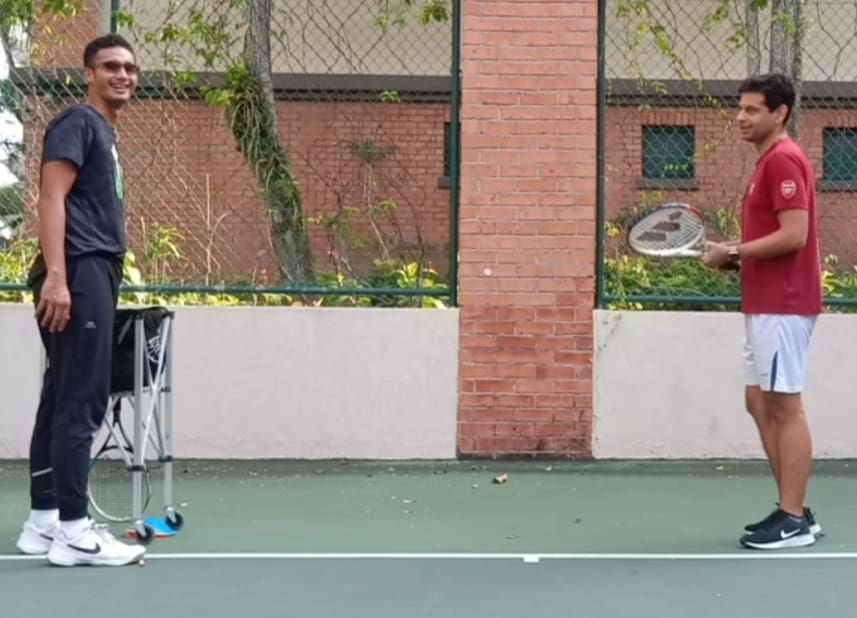 “This is the first time my son; Alessandro Passino (6 years old) has startedto learn tennis from Thaha He is patient and good with children. He is a nice and approachable person to learn tennis from because his pleasant and positive attitude can make tennis seem fun and interesting. Alessandro has short attention span due to his young age and Thaha has worked diligently to improve his attention abilities. Thaha gives stickers to motivate Alessandro when he does well in the lesson, which motivates him to work harder. The excitement Thaha puts in the lessons has given Alessandro the passion to want to continue playing tennis. With his relentless motivation and professional way of teaching, I believe Alessandro will be good at tennis one day. I know Thaha will be an excellent fit for any tennis organization”

“Thaha has been teaching my son Justin for the past three years. Under Thaha‘s training, from not knowing how to play tennis at all, Justin is becoming a proficient tennis player. In 2013, Justin joined with a team to participate in the KLM competition for 10U, and his team was ranked No.4. Thaha is an extremely reliable coach who has never missed a single class and is always on time. In addition, he is passionate about teaching tennis and truly cares about his student’s development. Thaha writes me long sms messages reviewing Justin’s performance and progresses after classes. He also constantly encourages Justin to play better and to believe in himself. He even took his free time on the weekend to come to see one of Justin’s games at the KLM competition. I would highly recommend Thaha to other students and parents”

“My daughter, Celeste Yeh, has been receiving private tennis lessons from Coach Thaha for the past two years. Celeste started tennis lessons at the age of three as a beginner. During this period of time and under Coach Thaha’s guidance, Celeste’s tennis has improved greatly, and she is now comfortably returning both forehand and backhand shots and has developed the basic footwork to move around the court efficiently. Coach Thaha has a very strict and efficient routine for each training session. Every lesson, he would first work on the control of the ball, encouraging the ability to hit and aim at certain sections of the court. Then he would work on the footwork in addition to forehand and backhand shots, requiring the student to run, hit and aim at certain sections of the court. After working on the basic swings, he would work on introducing the serve and incorporate fun games to develop footwork and ball sense. Not only is Coach Thaha a great tennis coach in terms of his ability to teach core tennis skills, he is also a dedicated and caring coach. He is disciplined with his students but he also consistently strives to get his students to enjoy the sport and to motivate them to give their best. He teaches them how to have a good attitude on court and how to be a good sportsman. I would highly recommend Coach Thaha to any student interested in learning tennis.”

Pertama Tennis provide tennis coaching services across the island to students of all age groups (children and adults) as well as students of all skills level (beginner, intermediate & advance). These lessons can be conducted in individual or group lessons, depending on the students’ interest.

Learn tennis from us

With the need to develop soft skills, learning tennis is a unique sport with a class of its own. We have the best coaches to guide you to bring your tennis skills to the next level.

Sanders and Peers set for US Open 2022 mixed doubles final

US Open 2022: Sanders and Dolehide fall in doubles semifinal

Error validating access token: The session has been invalidated because the user changed their password or Facebook has changed the session for security reasons.
Need Help? Chat with us
Start a Conversation
Hi! Click one of our member below to chat on Whatsapp
The team typically replies in a few minutes.
Please accept our privacy policy first to start a conversation.
Coach Tennis
Coach tennis